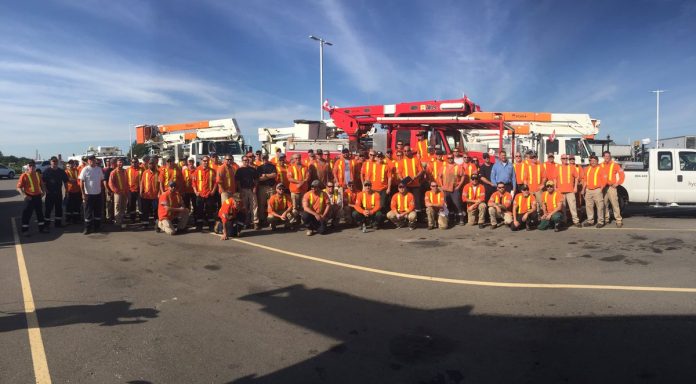 Hydro One announced yesterday that it will mobilize 175 employees down to Florida to help with the Hurricane Irma relief efforts. The hurricane, now downgraded to a Category 1 storm, has caused catastrophic flooding and damage to Florida and much of the Caribbean since it hit the region last week.

“Our thoughts and prayers are with the people in Florida as well as everyone else in the path of Hurricanes Irma, Harvey and Jose,” said Greg Kiraly, Chief Operating Officer, Hydro One.

Hydro One will send 150 lines and forestry staff, as well as 25 supporting resources, including mechanics, to help with the much-needed restoration efforts. Crews will bring 52 bucket trucks to Florida, as well as 30 other vehicles and pieces of equipment to transport and replace poles.

Crews are expected to cross the Canada/U.S. border in Niagara region, Thousand Islands, Pigeon River and Fort Frances on Monday afternoon and are expected to reach the affected areas by Wednesday.

As part of the North Atlantic Mutual Assistance Group, Hydro One had been participating in National Response Event discussions regarding deployment of resources in the hours leading up to Sept. 9, when it received an official request for help from Florida Power and Light.

Hydro One has reciprocal agreements in place with North American utilities to provide assistance during significant power outages. In these mutual assistance situations, all costs are covered by the utility receiving the help.

Hydro One is a leader in safety and storm restoration efforts.

In 2017, Hydro One was awarded the prestigious Emergency Recovery Award by the Edison Electric Institute for its power restoration efforts after a severe winter storm ravaged most of Ontario in March 2016. During that storm, approximately 1,450 Hydro One workers braved hazardous conditions for a total of 97,000 hours to restore power to nearly 105,000 customers who were affected at the peak of the storm.

In the past, Hydro One has sent crews to Massachusetts, Michigan, Florida, Ohio, Vermont, Washington, DC, and the Carolinas. In July 2012, Hydro One dispatched 200 employees to Washington, Baltimore and Virginia after a devastating wind storm knocked out power to more than three million homes and businesses. A few months later, in November 2012, 225 Hydro One employees travelled to Long Island, N.Y., to assist in the Hurricane Sandy restoration efforts. That year, Hydro One was awarded the Edison Electric Institute’s prestigious Emergency Assistance Award for supporting the June 2012 Mid-Atlantic and Midwest derecho and Hurricane Sandy recovery efforts.

Photo Credit: Nicole Martin via Hydro One on Twitter