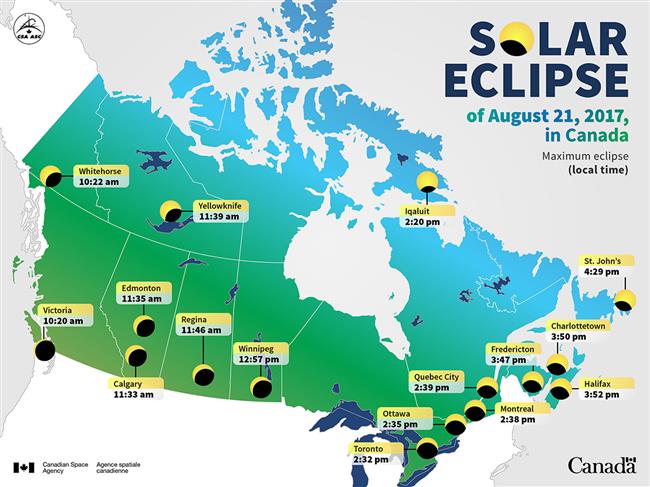 On August 21, 2017, a total solar eclipse will cross the entire United States (from west to east). Fourteen US states will be lucky enough to witness it in its totality, and the other US states and Canada will be treated to a partial eclipse.

The path of totality is a narrow corridor approximately 100 to 115 km wide where the Sun will appear to be completely covered by the Moon for a short period of time (between 2 and 3 minutes). This is the most spectacular part of the eclipse, as those who are lucky enough to be in this corridor will be able to see the Sun’s corona, the chromosphere, prominences and streamers. Proper eye protection is essential before and after totality.

For those outside the path of totality, the Sun will appear to be partially covered by the Moon (partial eclipse), and proper eye protection is required at all times.

In Canada, a partial eclipse will be seen from almost every Canadian city.

Looking directly at the Sun, without appropriate protection, can lead to serious problems such as partial or complete loss of eyesight.

During a solar eclipse, it is imperative to wear special glasses with filters designed for eclipse watching (ISO 12312-2 international standard) to prevent eye damage. Regular sunglasses will not protect your eyes sufficiently.

The next total solar eclipse to be visible in Canada will occur on April 8, 2024, when the path of totality will cross Mexico, the United States and eastern Canada.