Students from Gravenhurst High School (GHS) will take the stage on Dec. 6, performing an original play written by the class as part of a four-year collaboration with the Gravenhurst Opera House.

Krista Storey, manager of arts and culture for the Town of Gravenhurst, reached out to GHS drama teacher Earl Sacrey four years ago to suggest a collaboration between the school and the Opera House. Storey suggested having students perform in the professional Opera House space for the whole community, and Sacrey decided an original show that suited the talents of his students would be the best option. The partnership has continued since and, this year, Sacrey sat down with his class of about 25 students to talk about the play and what they wanted it to look like. Together, they created Imagine That!, the story of Josh Farmburger, his move to a new town and the troubling appearance of his imaginary friend.

“We talked about what we liked as kids and what were some fun subject areas, and we ended up landing on imaginary friends as a really broad topic to explore,” Sacrey said. “From that point, we break the kids off into groups and they start improvising or planning little scenes.”

The group continued to share ideas for a few weeks before deciding on their favourite ones from the bunch. Sacrey then worked with older students from the Director’s Craft course to write and structure the play, borrowing from student scenes and pulling together the class’s ideas.

“The kids bring a lot of energy and a lot of creativity to the table, and so my job is about reining that in and structuring that,” he said. “It’s showing them the hows of how to write a script or how to paint the sets or how to learn lines and trying to capture some of that huge and boundless energy and form it into something presentable.”

Working with an original play also gives the actors more flexibility to improvise in rehearsals and see what sticks, he said. The fact that the class created the play themselves also means that the characters were written with the actors in mind.

“Because it’s a show written for these specific kids, it does smooth out the rehearsal process a little bit because we’ve already tailored the roles to the actors,” Sacrey said. “If someone has a good singing voice, you throw them a song. If someone has a funny character that they like to do, we can write that right into the script.”

Grade 9 student Adam Despins shares a propensity for humour with his character Josh, the lead in the show that has concerns about fitting in at a new school.

“He’s moved to a new town and it’s tough for him because he knows no one and he’s meeting new people, but not easily,” Despins said. “He’s a teenager and he’s got this imaginary friend, and he’s stressing over it because he thinks he’s the only one.”

While learning lines can be stressful, Despins said he’s enjoyed spending time with his friends along with making new ones throughout the course of the show. He’s excited to make his acting debut onstage at the Opera House in front of family and friends, and he’s not the only cast member that’s new to the stage.

“Because it’s [Grade] 9 and 10 Drama, for a lot of them, it’s going to be their first audience and their first play,” Sacrey said. “I think they’re going to surprise themselves and that’s always a great feeling when they realize they can do stuff they didn’t think they could.”

The students will get to showcase their talent in front of 400 elementary students at two daytime performances as well as a performance for members of the public at 6:30 p.m. Sacrey hopes that locals will bring their families out for a night of laughter, music and colourful characters.

“It’s a great example of what we can put together in Gravenhurst,” Sacrey said. “It’s a collaboration between the town and the school, and it’s a great way to celebrate what our youth are up to.” 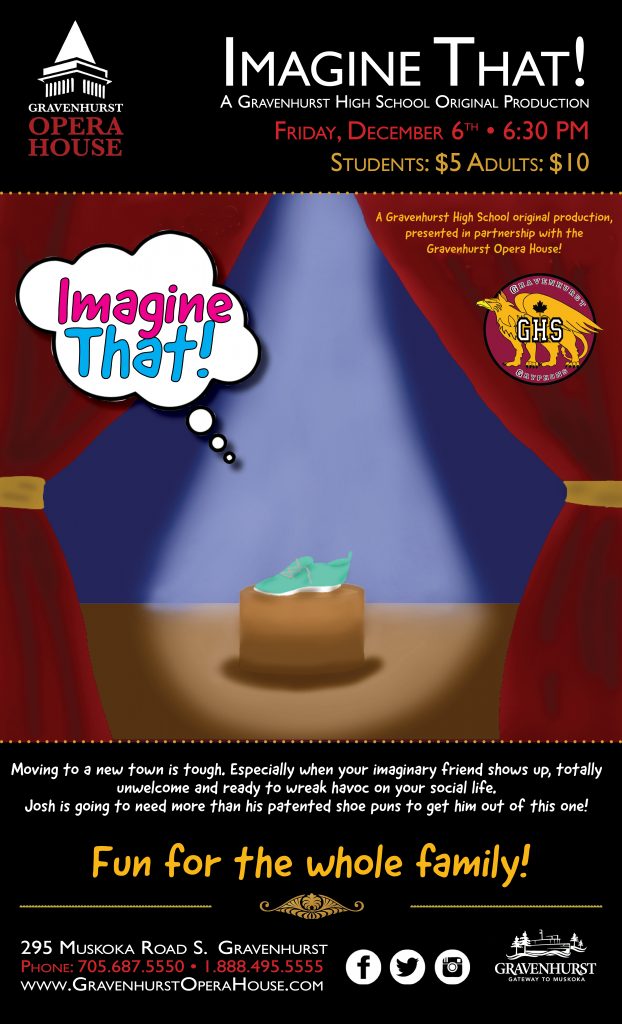