Jesse Nobleman, Puneet Gill and Adam Latimer started Project Think First as a group project for their coursework in the Police Foundations program at Georgian’s Orillia campus. They were asked to cover one of the four major driving offences: impaired driving, aggressive driving, distracted driving or not wearing a seatbelt. The group decided instead to address all four, hoping to educate new drivers from ages 16 to 24 about the dangerous but common driving errors.

“As we got started with it, we realized that it’s really a bigger issue than we initially thought,” Nobleman said. “We’re trying to really make something of it and actually take this outside of Georgian College and outside of this project.”

They took to social media, starting Twitter and Instagram accounts to reach the younger audience they hope to educate. On their pages, they post short videos and colourful graphics with facts about driving safety that they hope will draw in a wide audience of young people. 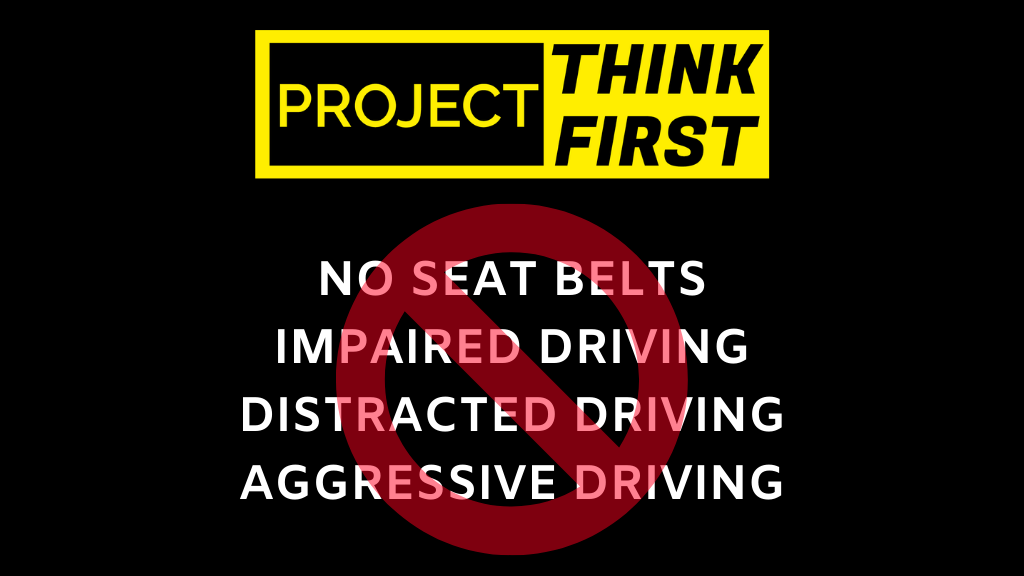 Once they develop a good following, the group hopes to create a website and expand to other social media platforms like Facebook, which could help them reach older audiences, Nobleman said. They recently launched a contest as well, offering a car safety kit to a follower that helps them get the message out.

“It’s definitely a tool to help spread the word more because people will share more if there is something that they could potentially get back,” Nobleman said. “However, we also did it really because the kit that we are giving away is incredibly helpful, and if we could even make one person’s driving experience a little more safe by giving that away, then we feel like that’s a success to us.”

Gill and Latimer said they were raised to avoid impaired and distracted driving and to always wear a seatbelt, but they agree that they both had problems with aggressive driving before starting the project. Noblemen also has a personal connection to the Big Four through a family member that struggled with addiction. Though they didn’t hurt anyone while driving impaired, the situation made Nobleman realize the gravity of getting behind the wheel.

The group hopes to establish the message that it’s not cool to be unsafe, aiming to help young people become a support system for each other to avoid violating the Big Four.

“It’s a real life issue and the results of it are oftentimes fatal when it comes to impaired driving,” Nobleman said. “It’s almost a downward spiral because maybe you get pulled over for speeding one time. You might not learn from that lesson and, if you continue doing it, it could lead to a whole variety of things.”

Distracted Driving is one of Canada’s Big 4 Driving Errors, and whether you’re stopped at a red light, driving through slow traffic, or “just quickly checking a text,” there is no excuse for using your device while driving! Risking your life, and the lives of other drivers is unacceptable. The text can wait. (DISCLAIMER: This video was filmed on a closed road, away from people and vehicles, strictly for educational purposes, please do not attempt this on your own) #projectthinkfirst