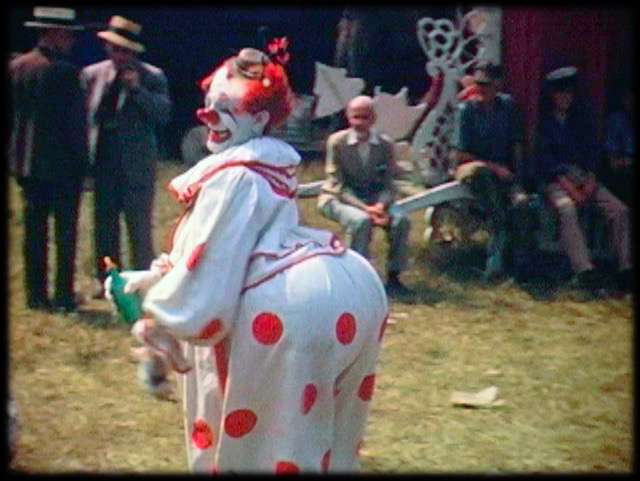 A man flips through a novel, perched atop a pair of giant stilts. Elephants graze through short grass while clowns cavort in front of a cheering crowd. These are images of a bygone time and a spectacle since forgotten—the Ringling Brother Circus.

These images are coming to Huntsville as part of a special new exhibition by Canadian/American artist and photographer Elizabeth Siegfried, who reclaimed the images from forgotten film reels found in her family’s cottage outside Algonquin Park.

Rummaging through a wooden crate left for years, Siegfried expected to find broken dishes and other household minutiae. Instead, she discovered a box of wonder, revealing reels of 16 mm film that took Siegfried on a journey back in time. The footage was captured by Siegfried’s grandmother, Elizabeth Chapin White, during family trips to the Ringling Brothers Circus in Rochester, New York and Sarasota, Florida between 1927 and 1945.

“It was as though my grandmother had reached through time to give me a tremendous gift,” Siegfried says. She quickly realized she and her grandmother shared more than just a name and the same photographic sensibility—they even shared traveling routes. Around the time she discovered the films, Siegfried and her husband had purchased a home in Sarasota, Florida. “I knew it must be kismet. I also knew that I was about to embark on an important and deeply meaningful cross generational collaboration.”

Siegfried spent the next four years transferring over 90 reels of film to digital video and watched vivid scenes and stories from the Ringling Brothers Circus come to life. The scenes revealed an historic golden era of the circus, never to be experienced again.

“The Ringling Circus closed in 2017 after 146 years of being an American icon,” says Siegfried. “My grandmother’s images not only document the behind-the- scenes experience of the back lot and the intriguing famous clowns of the day— her images are poignant glimpses into the past.”

Decades later, Siegfried has given these stories new life, carefully selecting individual frames and converting them into large-scale photographic prints for her exhibition “CIRCUS!”.

Intersecting Siegfried’s family’s history with a cultural icon of old, CIRCUS! captures the shared artistic vision of two women, separated by more 70 years, and provides a lens into a different time in America, when families filled the big top to be delighted and mesmerized by wild animals and circus performers.

CIRCUS! will be on display in Huntsville’s Partner’s Hall at the Algonquin Theatre from July 1 to 31, with an opening reception on Saturday, July 14 from 1 to 3 p.m. Everyone is welcome and encouraged to RSVP atwww.bit.ly/circusexhibition