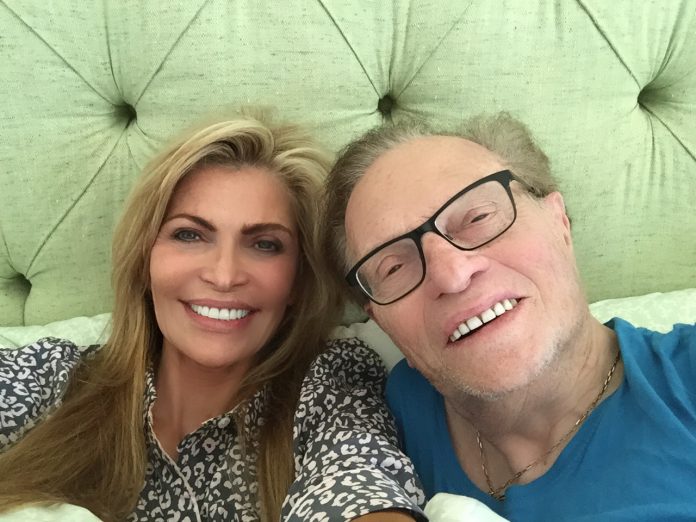 Muskoka sees its share of celebrities, but it’s not every day you get to interview two of them while they’re still in bed enjoying cottage life.

This morning Muskoka411 was able to reach world-renowned television host Larry King and his wife, actress Shawn King, as they were just getting up at a friends’ cottage.

The couple are visiting for a few days with Canadian businessman Stan Bharti and his wife Hannele, whom they met back in LA.

Larry jokes that when he first heard the word ‘Muskoka’, he thought of the Catskill Mountains.

“I love the lake, it’s very serene,” he tells us from his bed. “I recommend everyone to come to Lake Muskoka, especially if they have a beautiful wife.”

Shawn, known for her roles in the films Rover Dangerfield, Monaco Forever and Bombshell, jokes that she under-packed for the trip when she first heard they were headed to ‘a cottage’.

“When we got up here and pulled in the driveway, I knew I should have brought a lot more stuff,” she laughs.

For his part, Larry’s spent his time here taking long walks, reading books on the dock, napping and “watching the frivolity” as Shawn and the others enjoy swimming, waterskiing and tubing. “Leaping, jumping and hopping” is how he puts it.

The couple are here with their son Cannon, who brought his friends Ethan and Jaylen along for the trip. Their other son Chance couldn’t make it this time out – he’s back home rehabbing an injured shoulder.

So far on this visit, the Kings have spent time with their wonderful hosts, plus swimsuit model Cindy Crawford and friends Karen and George Rosenthal who are just two doors down from where they’re staying.

Other celebrity notables they’ve hung with in cottage country include Goldie Hawn and Kurt Russell and of course, Martin Short.

Overall, the vaykay’s been spent experiencing the best Muskoka has to offer – today the kids are going cliff diving and last night the couple dined at the Marriott.

They also find time to check out the local shops too.

“We go to the Christmas shop and get fudge,” says Shawn.

Funnily enough, Larry’s one minor pet peeve about the locale has to do with news.

A huge Dodgers fan, King complains that all Toronto area sports news is filled with items about the Blue Jays and hockey.

“It took me half an hour to find out about the Dodgers,” he says drily.

Having one of the world’s most preeminent interviewers on the line, we couldn’t help but ask him his opinion on how the news world has changed, ramping up as it is speed-wise in the digital age.

King is a fan of in-depth news coverage. Broadly, he’s seeing that type of reporting’s decline.

“Speed leads to misinformation,” he says. “Too much info, given by people who don’t know deep sourcing.”

He says he gets everything he needs from his favourite paper – the New York Times.

We also asked him about some of his favourite Canadian interviews over the years. The roster includes prominent musicians like David Foster and Michael Buble, comedians Rich Little and Martin Short, “three or four” of our Prime Ministers, sports heroes Wayne Gretzky and Gordie Howe as well as actors Michael J Fox and Alan Thicke.

The couple, their son and his friends will continue to enjoy their stay here in Muskoka until Sunday.

* Larry King Live was an American talk show hosted by King on CNN between 1985 and 2010. It was CNN’s most watched and longest-running program, with over one million viewers nightly. Now you can catch King by watching  #LarryKingNow & #PoliticKING on his digital network, @OraTV!

Fanotech Manufacturing Is Hiring A Production Supervisor In Huntsville

Fanotech Manufacturing Corp Has An Employment Opportunity For CAD Designers