Written by a representative for Climate Action Muskoka

The new group Climate Action Muskoka is calling on all Muskoka citizens to come together at a Global Climate Strike rally and march on Friday, Nov. 29 from 11:30 a.m. to 1 p.m. at Memorial Park in Bracebridge.

It’s part of Global Strike 4 Future, in which millions of demonstrators worldwide will be calling on individuals and all levels of government to work together to take urgent action to tackle the defining issue of our time—climate change. 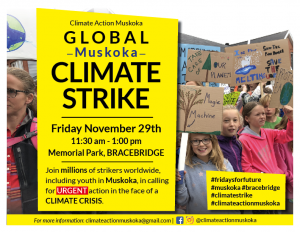 “Kids used to worry about what they were going to be when they grew up,” said 12-year-old local climate activist Cailan Punnewaert. “Now the worry is ‘Will we have a world to grow up in?’”

Bracebridge and Muskoka Lakes Secondary School (BMLSS) student Kelsey Smith, one of the organizers of the school-wide walkout in September, is encouraging her classmates to “make a day of it” and participate in the Nov. 29 strike. Nov. 29 is a Board Holiday.

“I do feel like everyone should come out and support this cause,” Smith said. “We are a small town, but every town and every idea can make a change.”

“We have to do much more, and we have to do it faster,” said Tamsen Tillson of Climate Action Muskoka. “Individuals, business owners and every level of government have to join this fight.”

Similar marches are happening in Parry Sound, and the Bracebridge rally is being supported by other groups for whom climate activism is front and centre such as Muskoka Power of Many. Those unable to attend the Bracebridge demonstration in person are encouraged to put up signs on their homes or their places of work and to gather in their neighbourhoods to spread awareness of the need for urgent action.

Canada, whose per-capita emissions are more than double the average of the G20 nations, is not on track to meet its own Paris Accord targets, targets which many scientists say are too weak. Earlier this month 11,000 scientists declared a climate emergency.

A group of concerned residents has been participating in weekly climate strikes in Bracebridge since Sept. 27, when they came out to join the students of BMLSS.