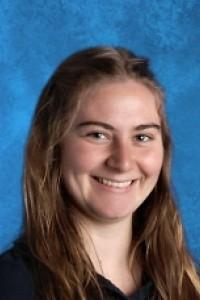 The meeting started with a celebration of Mass in the school chapel presided by Father Peter Selvaraj, Pastor of St. Joseph’s Catholic Church. There was also a commissioning of the Board’s new Student Trustee, Anna Szumska (pictured) who is currently a Grade 12 student at St. Dominic’s.

All Board meetings are open to the public (with the exception of private sessions) and agendas are posted to the website at smcdsb.on.ca in advance of the meetings.